Below photos show Group Picture in front of Mission BBQ truck, Check Presentation to Reneea Wheeler of Haven, Food Servers ready to dish out BBQ, a photo of Karen Lennon who did such a colorful job decorating the tables and room in RED, WHITE and BLUE...!

Our guest speaker at the January general meeting was Renee Wheeler from the Haven in Leesburg, our designated charity for this year. After which we played a Trivia Jeopardy game. 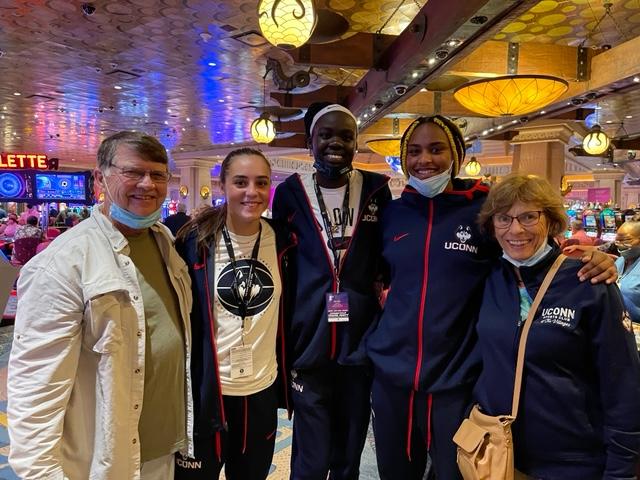 Our last summer get together at Sammy's on August 13th, where we presented owner, Paulie, with the plaque recognizing them as partners with our club and offering a discount to our members. Presenting from left is Vice-President, Lee Lennon, Paulie and Rita Miller. 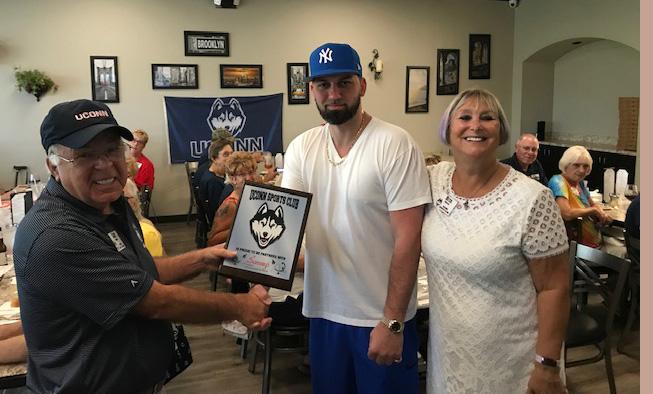 Our first summer get together at Sammy's, in lieu of a monthly meeting, on June 18th.

Our first live, in-person, general membership meeting in over a year! Highlighted by the election of officers, with a new president.

And a good time was had by all! About 60 members enjoyed our 6th Birthday Party on March 19th, with pizza and a birthday cake.

Our drive-through, fill the truck, Toys for Tots collection.

We attended our annual trip to the Villages Polo Field for the matches on Friday, November 13th. The event was a little different than usual due to the restrictions of the pandemic. 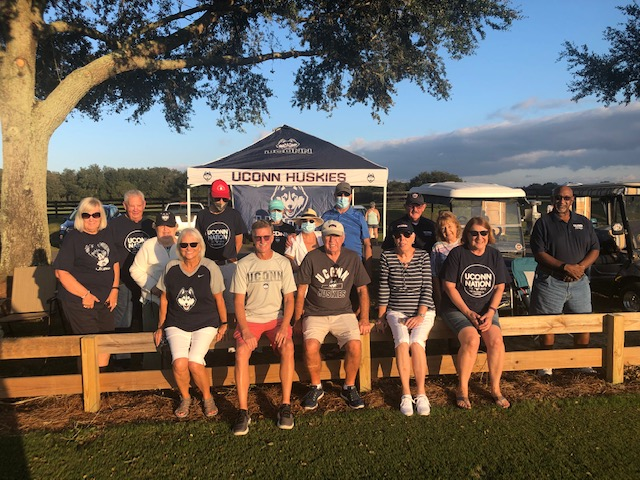 One of our members, Diane Crilley, is retiring from her job as store manager for TJMaxx. Her assistants are sending her off with this! 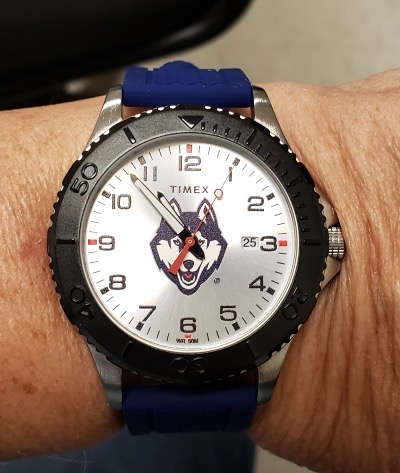 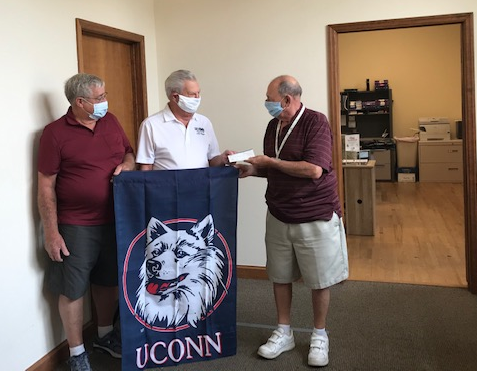 No, they're not about to go out and rob a bank!  It's UConn Sports Club President Wendell Goldsmith (center) presenting a check for $600 to the VHA's Helping Hands program treasurer, Ron McManhon and president, Bill Gotschalk.  Helping Hands was the club's "bucket" charity for this fiscal year.

What the "Well Dressed" UConn Sports Club member wears when going out!

It was a good trip to USF for a UConn women's win on February 16th !

It was another stressful game for our UConn ladies basketball team on Thursday, January 23rd.  It seemed there were two UConn teams playing, one during the first half and the real team in the second. Tennessee gave them a tough time for half the game, but we were victorious. See the pictures below of some club members at Gator's for the action.

It was three packed buses to the game at UCF on January 16th for another UConn women's win!

It was the 6th Annual Battle at The Villages the weekend of December 27, 28, 29 and our Lee Lennon, executive board member, attended.  He met Heisman Trophy winner, Charlie Ward, there. Thee Villages Buffalo team made it to the finals, but came in 2nd.  The Windsor, Connecticut team (who Lee hosted) didn't get past the second game and was eliminated. If anyone has other photos, please email them to Phil Fulco, link on CONTACT US above.

It was a Merry good time at our 4th annual Christmas/Holiday party, Friday, December 13th! Great job by the committee.

College Colors Day 2019 was a big success, exceeding last year's total with 43,049.9 pounds of food!  UConn Sports Club captured the 3rd place trophy by collecting 3,332 pounds, beating many of the bigger schools among 50 entries.  Below are photos of the day and some printed in the Daily Sun.

Our 2019 College Colors Day food drive has begun!  We even made it into the Daily Sun!

In lieu of general membership meetings, in June and July, we held our summer get togethers. 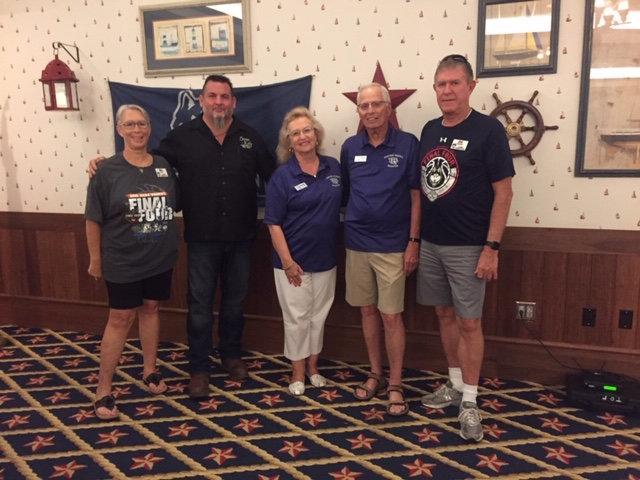 Here are some photos from the semi-finals game against Notre Dame.

Regardless of the outcome, the BEST looking team in the Final Four of 2019! 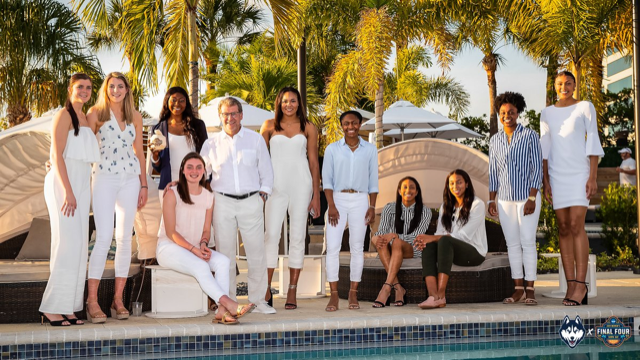 Elite 8 for the 12th time in a row! Celebration of a tough win.

How sweet it is!  Our 26th in a row Sweet 16 victory! Watching the game and celebrating at Gator's, March 29th.

We had quite a celebration of our 4th Anniversary at the March 8th meeting.

It was a good time at the March 4th game against USF, especially after a really shaky start and being behind for most of the game.  Katie Lou was sorely missed.  But, once again we prevailed!

If you didn't attend our annual Holiday Party in December, this is some of what you missed!

We celebrated our success in the College Colors Days food drive at our October meeting. 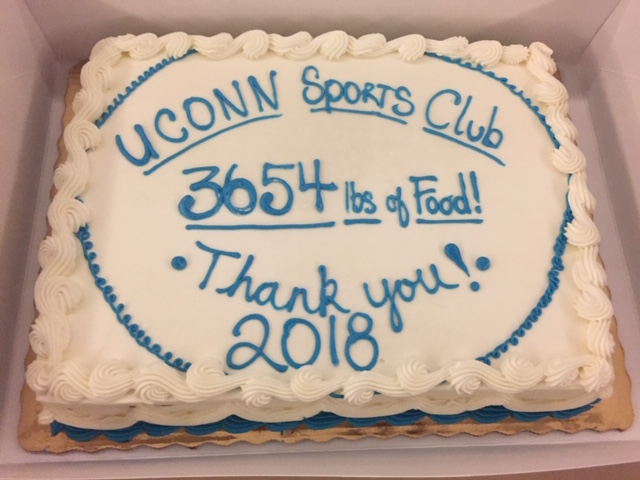 We were at the Sports Card and Collectible show on Saturday, Sept. 8th.

July 14th UConn at The Villages Soccer Club's final game of the regular season, with a win to qualify for the postseason playoffs.  The club was there to cheer and support them. The "Fill The Truck" food drive was a big success, also. We collected over 600 pounds of food at the last two games. 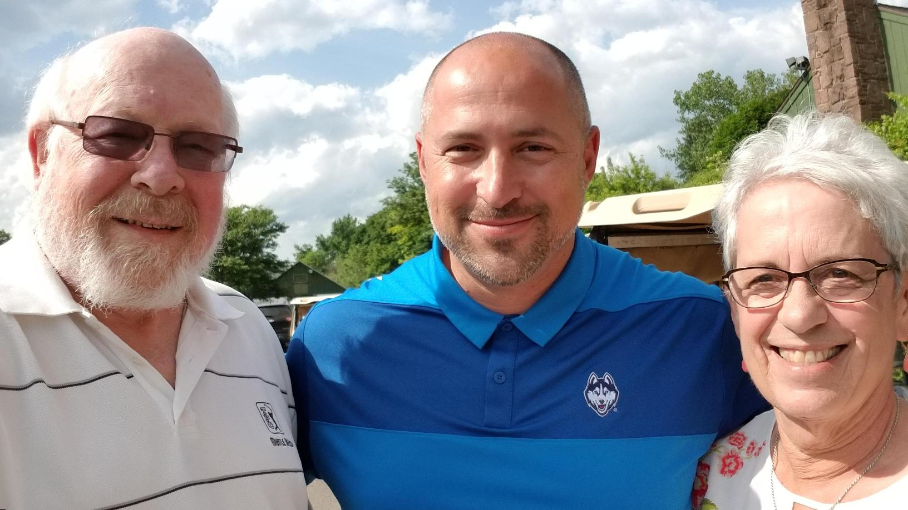 Our special guest at the April general meeting was Wildwood High principal  and girls basketball team head coach, Richard Hampton.  A cake was presented to celebrate their 2nd in a row state championship season. 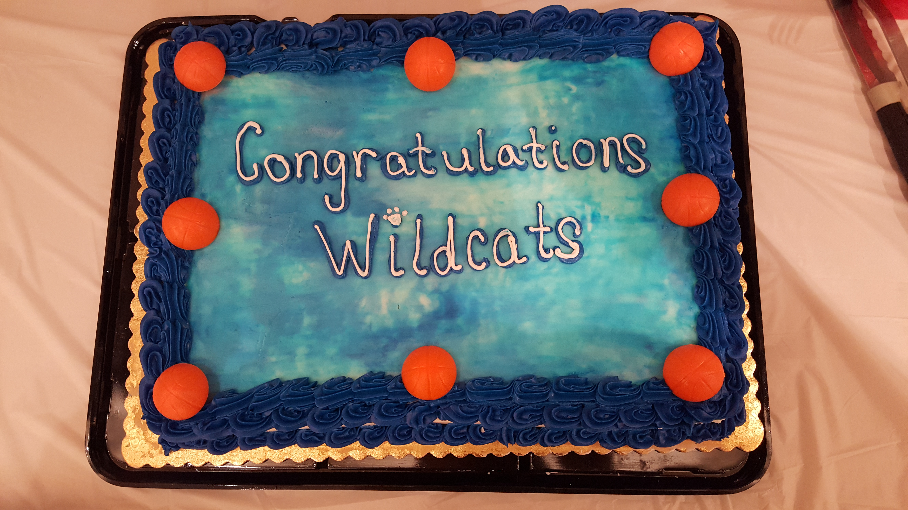 We had a presence at the Sports and Card show at Colony Cottage Recreation Center on Saturday, March 31st. 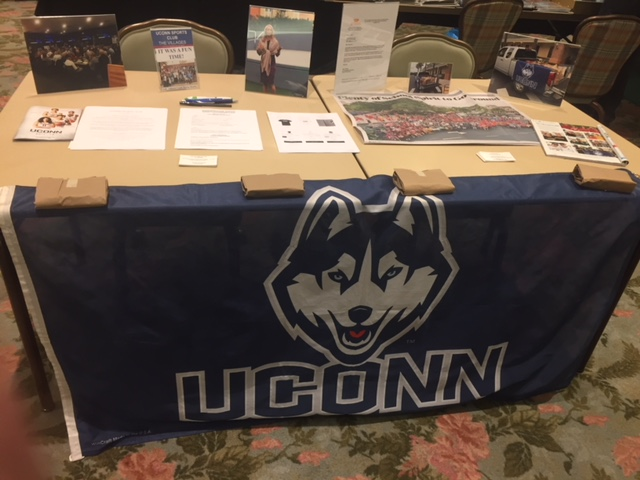 Game watch at Gator's, 3-6-18, AAC championship game vs USF.  Another victory 70-54 and another championship!